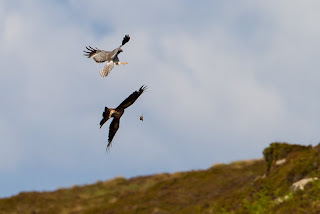 Today saw the Hen Harrier season well and truly get off the mark with the first food pass witnessed for 2016. This stage of the season is arguably one of the most important of all. The body condition of the females will determine how many eggs they will lay in about a months time. If the female is not receiving much food, physiology will lessen the number of eggs – maybe only 3-4 eggs. If she is receiving good quantities (and quality) of food, she might lay 5 or 6 eggs. This is a natural adaptation that follows good logic – no point in trying to rear many chicks if the signs are that food is low, but if food is high then it would be worth capitalising on this and laying more eggs in the hope of rearing more chicks.

The Hen Harrier’s food pass is one of the finest spectacles in all of nature. The male will come in with the food, often holding it low in one leg so that it is clearly visible to his mate. There will be some communication between the male and female and she will rise up underneath him in the sky, turn over and he will drop the food for her to catch in her talons while upside down! She will then take the food and eat if for herself or take it to the nest when she has chicks. It is an acrobatic feat that is unrivalled, though two trapeze artists perfectly moving in synchrony to meet one another is one way of describing what it is like (only better!!).

So we saw that today at one site, which was wonderful. We are now off the mark.

Elsewhere, at another site we had a male sky dancing to see off a hooded crow. It is popularly considered that the Hen Harrier’s sky dance (see Hen Harrier Diaries Entry No. 1 or the video on www.henharrierireland.blogspot.ie) is to show off to potential suitors, but it is likely to also be a territorial display to show other birds (including other male harriers and possible trouble like crows) that the male is strong and agile and this is his turf! The sky dance of the male today made an absolute fool of the hooded crow. He was bamboozled by the agility of the male harrier and after a while did not know which way was up, as the male soared above him and dived below him so many times. He simply could not keep up with the Hen Harrier. However, he did persist in trying to attack the harrier for 15 minutes straight before finally giving up and leaving. The male’s mate then appeared and soared for some time high in the sky. The crows of course have not gone away and there may be more to come from them as the season progresses. They are often a lot of trouble for Hen Harriers as they attempt to go about their business and can take the harrier’s eggs and chicks also.

3 traditional sites that were checked today showed no signs of Hen Harriers. This has become too common an occurrence. We will continue to monitor these sites in the hope that Hen Harriers might some how show up.

As the evening drew to a close, we were lucky enough to be treated to the sight of four Hen Harriers together at one sight. Hopefully these four will progress to be two pairs (there has traditionally been two pairs in the locality). Lots of soaring high in the sky was witnessed. One of the males was carrying food but did not pass it to any female. This may have been in an attempt to hardwire into the female’s minds that this male, above the other male, is the guy that carries food. Treat them mean and keep them keen?!

One of the females perched on a turf heap for 40 minutes and was surprisingly buzzed by a male Merlin! Merlins are Ireland’s smallest bird of prey and share similar habitats to Hen Harriers with heather moorland being the preferred environment. Wonderful birds to see.
Another wonderful bird to see in this environment is the Curlew and we had our first of the season today at the same site. These birds have become very rare. Like Hen Harriers, their decline is indicating a malaise in the upland environment; particularly due to afforestation, predation and agricultural intensification.

If you have any Hen Harrier sightings or records this spring/summer, we would be delighted to hear from you – but please do not publically disclose locations.

Keep in touch and watch out for the next instalment of the Hen Harrier Diaries!

Photograph by Highlandwildlifephotography
Posted by Unknown at 14:17