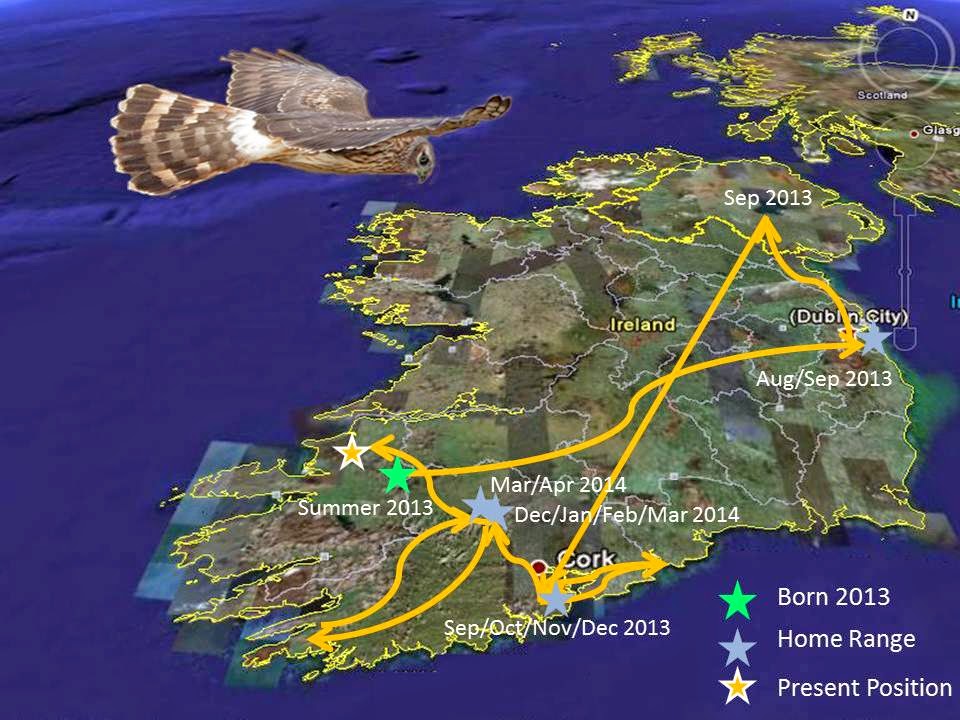 After an epic journey that took her from the bottom to the top of the country and back again, Heather has made it home!!!

On Sunday night, she roosted just 19km from where she was born and upon waking, proceeded to travel west towards her native Mount Eagle. She continued on towards Ballybunion (hey, it was a nice day for the beach!) and her last known fix was by the Stack's Mountains, the same upland range and Special Protection Area for breeding Hen Harriers from where she started out in life just last summer.

In Heather's short time to date, she has been in no fewer than 16 counties - Kerry, Cork, Limerick, Tipperary, Waterford, Laois, Offaly, Kildare, Wexford, Dublin, Meath, Louth, Down, Armagh, Cavan and Westmeath.

Imagine the stories she would have to tell from her experiences - from leaving her native Mount Eagle and family, to establishin her first home range in the Dublin and Wicklow Mountains (including a fly over Croke Park!), roosting in Oilseed Rape fields in Meath, the bogs of Lough Neagh or by the Atlantic cliffs of South Cork. She is now home in Kerry and you can continue to follow her fortunes on www.facebook.com/henharrierireland and www.henharrierireland.blogspot.ie

Heather's parents are back in breeding mode again this season.

Miranda is still in North Antrim.


The big news from the satellite tracked birds this week was undoubtedly that of Miranda's movements towards Scotland...or at least so it seemed midweek when she was right on the north coast of Antrim and even Rathlin Island - literally looking across at Scotland on a fine day during this present spell of lovely weather. However, she has stuck on in Ireland and is currently around the very same area as she spent some time in October (click here for information). She is around 200km from her sister Gráinne and neighbour Hattie in Langholm, Scotland, but this as we know is a journey that a young harrier would be well capable of. However, do the "Irish" males have one last opportunity to persuade her to stay in Ireland?! It is interesting that apart from the Isle of Man, Antrim is the only established and extant breeding area that Miranda would have passed through on her epic journey from home so far.

Heather may not  yet be as fully settled as things appear from the satellite data. She has still to be seen in the flesh in the Ballyhouras and so it is not possible to say if she is with a male. During the week she flew to Limerick City and back to the Ballyhouras again, in the process coming very close to where her sister Sally died in August (see here).

Interestingly, Miranda visited the same part of Lough Neagh during the week as Heather visited in late August. The mixing of individuals across a shared landscape is being revealed by this pioneering research using satellite technology in both Ireland and Britain. There is no doubt that there is a metapopulation, whereby what happens to Hen Harriers and their habitat or welfare in Ireland can impact on "British" birds and vice versa.

Miranda Moves from Mayo! Heather Holds in the the 'houras!

She has called Mayo home for longer than anywhere else in her life, but has Miranda now begun the long journey back to where she started out in life - South West Scotland?!

We would be terribly sad to see her leave us here in Ireland, but would be happy that she is alive and well and that she withstood the Irish winter of 2013/14 on the heather slopes near Ballycroy National Park in County Mayo.

Miranda roosted as normal at her site on the night of 12/13﻿﻿﻿﻿﻿﻿ April and was still there at 0930, but just 90 minutes later was 70km to the east, in County Sligo! The tag stopped transmitting then but it is hoped to give data again soon and we will all be a lot wiser when we realise where she is then!

Will she stick on in the Ox Mountains in Sligo? Hen Harriers have been recorded breeding here in the past but not in recent times.
Will she return to Scotland for the breeding season?
We all wish her the very best in her life.

Meanwhile, Heather is holding her own in the Ballyhouras, having set up a new home range. It is hoped to get some sightings of her on the ground in the next week or so to confirm is she is with a male.

Gráinne (Miranda's sister) and Hattie (their neighbour) have been seen with sky dancing males in Langholm. See the excellent http://langholmmoorland.blogspot.ie/ for more!

Life isn't played out according to a script!

Well one of the beauties of nature is how intriguing it actually is and you can be certain that wildlife species don't have to stick to any script if they don't want to or if conditions aren't right.

Satellite tagging is providing amazing insights as o the individual lives of the young Hen Harriers, Heather and Miranda.

After thousands of kilometres flying from Scotland over the Isle of Man to Dublin to Offaly, Roscommon, Longford, Donegal, Derry, Antrim, back again via Malin Head and then to Leitrim, Sligo and finally Mayo, Miranda has happily stayed on in the same territory since Mid November. She shows no signs of moving on to a breeding ground, at least not yet.

Heather has of course done her own epic journey from the south of the country to the north and back again, but has set up a number of territories in the process, getting to know an area well before moving on again (for various reasons). Recently, she has been prospecting around breeding grounds and now seems like she is establishing a new territory in the Ballyhouras. Whether she is with a male or will attempt to breed in her first year remains to be seen, though it is hopefully only a matter of time before she is seen in the flesh again for some ground truthing of what she is up to.

Just look at the movements of Heather and Miranda in the last 10 days. Very different. Are all individuals the same? Have these two read any scripts? 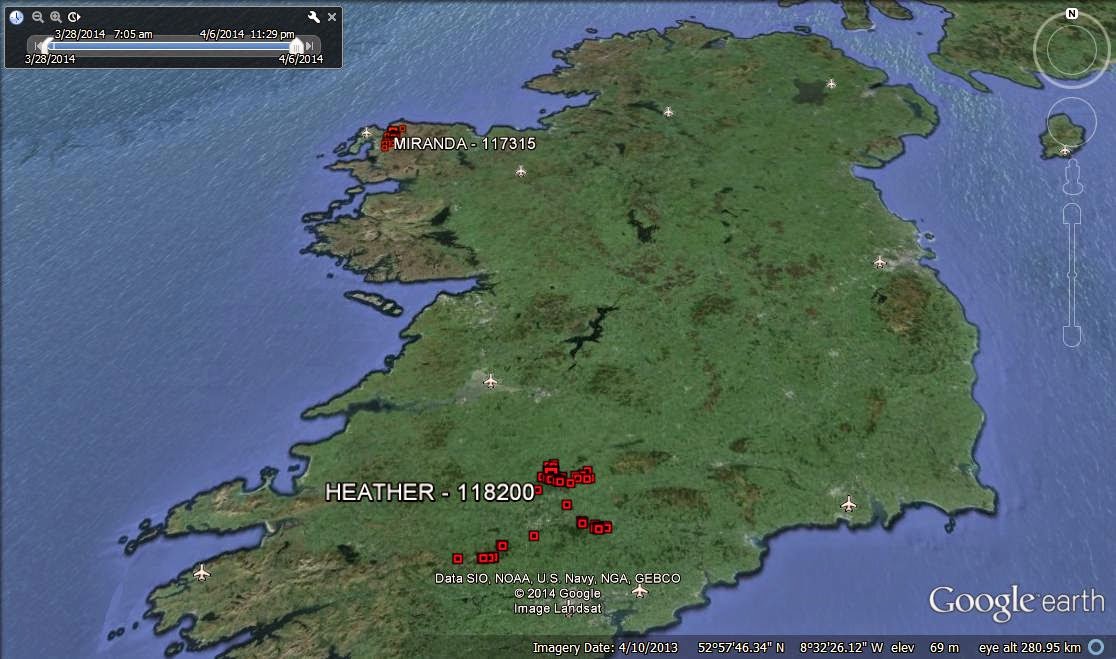