Miranda on the move

Miranda yesterday made a move of 120km from where she spent the past week in Glenveagh, Co. Donegal, to be in Cushendall, Co. Antrim less than 10hrs later. In doing this journey, she would have flown at least 200km (she did not take a direct route to Cushendall).

Miranda and Heather are now at complete opposite ends of the island of Ireland - over 400km apart, but don't forget that both birds have now visited this part of Northern Ireland. In September 2008, a young female Hen Harrier wing tagged in West Clare as a fledgling that summer was sighted in this part of Northern Ireland. What is the draw to this area? Hypotheses include that it may be on a migration corridor between Ireland and Scotland, a place where young harriers may meet their elders; but who knows. Who knows where Miranda will go next. Will she return to her native Scotland (now just 30km away), leaving Ireland behind as Glen did in 2010? Stay tuned.

Heather saw out the stormy weather at her home territory in South Cork yesterday.
Posted by Unknown at 06:03 No comments:


Heather is still holding territory in South Cork. Dave McGrath sent this wonderful photograph of her and believe it or not, this is the first time she has been photographed since she left her place of birth near Mount Eagle in Kerry at the end of the summer. It is a joy to know that she is doing well and to see her in the flesh. Heather has now been visually seen in Kerry, Kildare, Wicklow and Cork. Of course the satellite tag has given us so much more of an insight into her life, which would not have been possible otherwise.

Last night (night of 24/25 October), Heather returned to the original roost that she occupied after first touching down in South Cork, following her epic journey from Lough Neagh in Northern Ireland. This roost in South Cork was used originally for a couple of weeks until she moved to occupy her other roost less than 10km further west. She has spent well over a month at this more westerly roost now, until last night when she returned to the original roost. Was it the wet weather in the last couple of days that prompted this move? Will she return to her normal roost again? Stay tuned!

News on Miranda is good. She has spent the past week in Glenveagh National Park in Donegal now and has found another new roost for us! It is interesting that both Miranda and Heather have now spent time in two of our six national parks (Heather having spent a few weeks in Wicklow Mountains National Park).

Unfortunately, another young male harrier that has been satellite tagged in Scotland is feared to have been shot after moving to England. Let's hope that we can show a good impression in Ireland by taking care of Miranda and Heather and of course the habitats that they depend on also.
Posted by Unknown at 16:15 No comments:

Heather doing fine in South Cork, Miranda at the other end of the island - in Donegal!

Glad to report that Heather is still doing well in South Cork, and not travelling too far from her roost - so that is a good thing - it must mean she has enough food in the local area to keep her well.

The image below shows some of Heather's habitat use today (Sunday 20 October). You will see she uses the scrub areas in particular for hunting. These are some of the most important patches of habitat on the landscape. Unfortunately, these pockets of habitats are becoming further diminished by the day, as landowners clear these "unproductive" areas so that Single Farm Payments can be derived from the land. This is happening today more than ever and much of the wildlife that lives in these areas are being lost. Heather's movements are showing the importance of these areas to an Annex 1 species which Ireland is obliged to protect - a species which indicates the general biodiversity of the area. If these patches of habitat are cleared, what will be left in terms of wildlife?

Meanwhile, Miranda has travelled to be with the Golden Eagles in Glenveagh, Co. Donegal!
Posted by Unknown at 15:10 No comments:

Another amazing discovery as a result of Satellite Tracking!

Over the years, as part of the Irish Hen Harrier Winter Survey, we have had records of Hen Harriers coming in from the Irish Sea and also travelling out across the Irish Sea. Some young harriers that we wing tagged here in Ireland have been found in Britain. However, this new development is very exciting! We have a satellite tagged Hen Harrier from Scotland among us in Ireland tonight! This young female, named Miranda, was born in the south west of Scotland and has already been blazing a trail in her native country, before visiting the Isle of Man on her way to Ireland! See http://langholmmoorland.blogspot.co.uk/ for details on this extraordinary bird.


In October 2010, a satellite tagged young male from Scotland visited Ireland, but only very briefly before returning to Scotland again. See http://www.roydennis.org/animals/raptors/hen-harrier/satellite-tracking/glen-2010-2011/ for information on this individual.
This information is invaluable in showing the links that exist between Britain and Ireland in terms of our Hen Harrier populations. In a nutshell, what happens over there can influence the population here and what happens here, can influence the poulation over there! It is noteworthy that all 7 Hen Harriers satellite tagged in Britain this year are doing fine, whereas Heather is the only one of 9 Hen Harriers satellite tagged in Ireland to have made it to 100 days of age.

It will be fascinating to see where Miranda goes next. Will she by any chance meet up with Heather, who is evidently happy to stay in South Cork?! Only time will tell, stay tuned, there may well be a Scottish Hen Harrier coming to a roost near you! 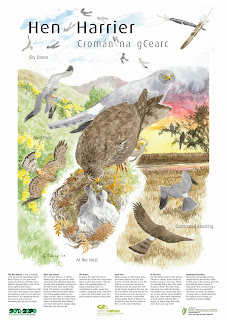 An attractive poster, with original artwork by leading Irish artist and naturalist Gordon D'Arcy has been commissioned by the National Parks & Wildlife Service of the Department of Arts, Heritage & the Gaeltacht.

We are particularly hoping to hear from schools who can follow this blog.

For more on education, see
http://henharrierireland.blogspot.ie/p/education.html

Heather has been based at her roost in South Cork now since early September.

She has set up a home territory and visits the same stubble fields virtually every day, occasionally checking out new places. It is good that she is familiar with the area now and knows where to get her food and where she can rest safely each night. She may well have learned of all these places from the older wing tagged bird, but she would of course have explored much herself also.

Last Tuesday night, Heather was seen during a dedicated watch on the Irish Hen Harrier Winter Survey, where she was seen to catch a prey item successfully, just before bedtime!
Posted by Unknown at 03:29 No comments: