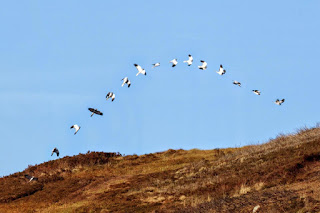 Sky Dancing Male Hen Harrier (photo David Palmer)
This is a wonderful time of the year if you want to enjoy watching Hen Harriers. It is when they perform their courtship displays, known as the sky dance. Really, words cannot do this aerial display justice, and even videos like this (https://vimeo.com/145538958) really can't live up to witnessing full blown sky dancing!


Today saw some wonderful sky dancing at a site in Kerry where a pair of Hen Harriers succesfully bred in 2015. For 1.5 hour...s, there was nothing to be seen, when as if from nowhere a male appeared on the scene. He performed a most remarkable sky dance, with 170 peaks and troughs - an amazing display of agility and stamina. Surely this impressed his mate and she soon came into the picture following the superstar on the dance floor! We all hope they do well this season. It is a long way to late July when we hope they will have reared chicks; fingers crossed!


At another site, it was a somewhat different story. The male was present alright, but there was no sign of his female. He sky danced and sky danced, exerting a massive amount of energy in hope that the female he bred with last year might see him and hopefully attach to him again this season. She did not show and while it is still early days, we are a little concerned that this may be yet another traditional breeding site that will lose a breeding pair. The nest was predated in 2015 and the female was not seen thereafter. Let's all hope that this is not the case and that the male's efforts will eventually pay off handsomely.

We will continue to keep our followers up to date with various news throughout the season.
All the best for the breeding season ahead!
Posted by Unknown at 12:32