The Hen Harrier (Cromán na gCearc) is a spectacular bird of prey and a piece of Ireland's natural heritage that anybody interested in nature or wildlife should strive to see at least once in their lifetime. The only thing is, once you have seen a Hen Harrier, you will want to see one again and again and again! 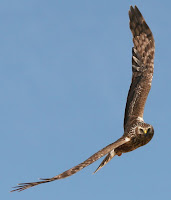 ﻿﻿﻿﻿﻿﻿﻿﻿﻿﻿Amazingly, the male and female Hen Harrier look strikingly different. In fact, they look so different, that for centuries people believed they were two different birds completely, and not the same species at all!

The male Hen Harrier is the flashy one. He has silver-blue upperparts but is white underneath. He has broad black tips to his wings. Typically the wingspan of adult males varies between 97 and 109cm.

The female is larger than the male and has a soft brown plumage with contrasting patterns under the wings. She has a white rump where her tail meets her body. This white rump is a sure way of knowing it is a Hen Harrier in front of you. The wingspan of adult females varies between 111 and 122 cm.

Despite their impressive wingspan, Hen Harriers are very light birds, with males weighing on average 350g and females 530g. The high wing:weight ratio enables the Hen Harrier to move effortlessly and gracefully. They are masterful among birds and can fly very fast or very slow, utilising the air as if it were an extension of their bodies. Hen Harriers can soar so high into the Spring sky that you will lose sight of them, even with high powered binoculars. At the same time, Hen Harriers typically float low over the ground in search of prey.

The Sky Dance is the Hen Harrier's awesome courtship display. Particularly in the early stages of the breeding season, the male Hen Harrier can be seen to show off his aerial skills in a display of agility, stamina and gusto that leaves the observer dumbstruck and then inspired. The male rises high in the sky and suddenly plummets to the ground in a serious of somersaults, corkscrews and twists, stepping on the breaks just before the point of impact with the ground, continuing upwards to rise to a point where he descends again in his acrobatic display. Such displays can last for up to 20 minutes without break and are truly one of the most special sights in the entire world of nature.

The Food Pass is a means of transferring food from the male to female in mid-air! The female rises from the nest to meet the male in the sky and she turns upside-down to grasp the food which he has just dropped into her talons. She then proceeds to return to the nest and feed the young chicks. When the chicks have fledged, they too are capable of this innovative and impressive mid-air re-fuelling technique, rising to take food from either parent.