The Chance of a Lifetime

A young bird beginning to make its way in life. Every flight over the horizon provides a new, never before seen vista. A free spirit. Where to next? The world is its oyster.

Then BANG! Struck down!

Hit by a car on the side of a road outside Castleisland, Co. Kerry. Left for dead.

But where there are people with compassion in their hearts, there is hope.

The young male is picked up and looked after for a week, before being brought to Kingdom Falconry who then rehabilitated the bird further, before releasing him as a healthy individual at a bog near Knight's Mountain.

There are many people who will do anything they can to help wildlife, particularly some of our most rare and vulnerable species such as Hen Harriers. This is a great example from two people who care about the world around them and there are many more out there who share their commitment.

While Heather had her life taken from her in a cowardly act earlier this year, this is a courageous act that has offered a young bird without a name another chance at life.

In the very same county of Kerry. The chance of a lifetime.

Let there be hope! 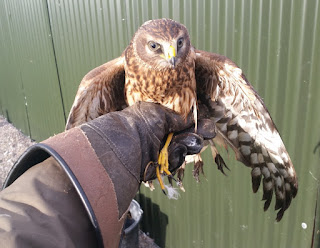