Heather the beautiful Hen Harrier - a tribute and a legacy


﻿
﻿
﻿ ﻿ ﻿ ﻿ ﻿ See this female Hen Harrier in the photo above? That was Heather's mom in June 2007 - her first nesting attempt as a young female on the uplands around Mount Eagle in County Kerry. You'll see this very image on information boards in the Slieve Bloom Mountains, on posters produced by Monaghan County Council about the Farney County's heritage, on various websites including www.npws.ie and on the information booklet that was sent out to landowners throughout the six Hen Harrier Special Protection Areas in Ireland. This image for a long time, represented hope. The female was unable to rear young on her first attempt in 2007 - this was not a "failed" attempt (Hen Harriers do not "fail" anything), rather her nest (with young chicks inside) was predated. However, there was hope, because this female was young and she had time on her side. 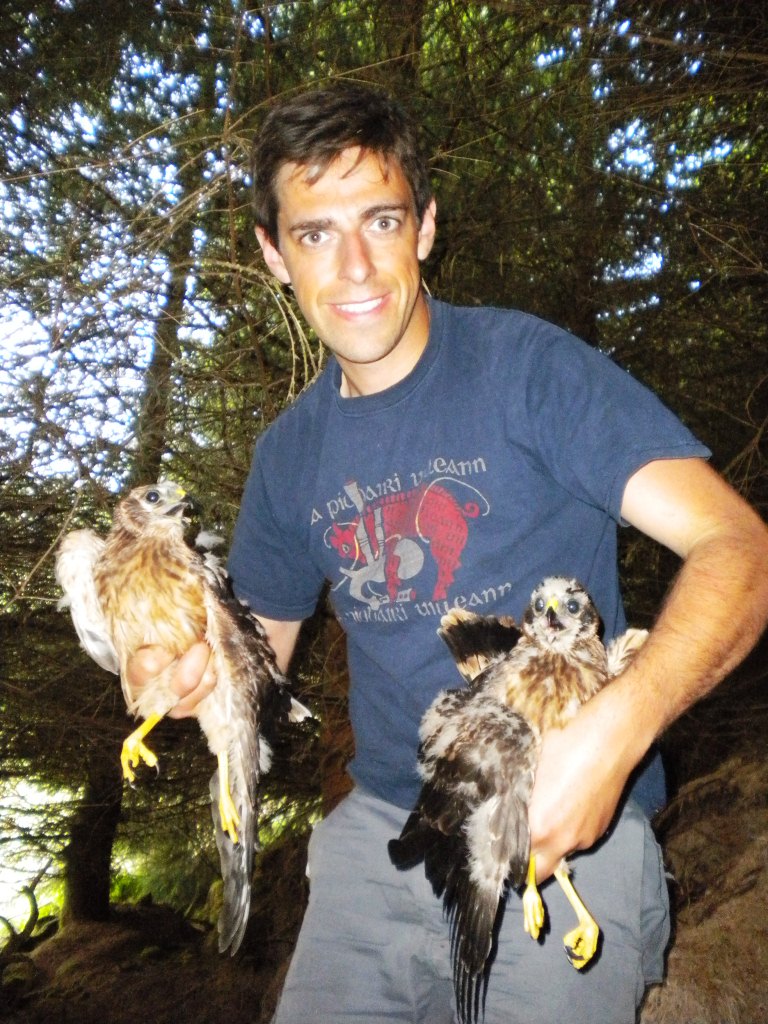 Fast forward to 2013. A great sunny summer near Mount Eagle and the same female was close to rearing her brood successfully. The breeding attempt was followed from the earliest sky dances by the sky silver male and his heather brown partner, to the fledging of the young chicks and indeed we were all so lucky to be able to follow one of the young chicks for years to come....

An early start saw one of the greatest days ever with Hen Harriers. By 0600hrs, two young healthy female chicks were expertly fitted with lightweight MWT satellite tags. Local school children named them Heather and Sally (after two of the most important habitats for Hen Harriers). Heather can be seen on the right of the photo and her slightly older sister Sally on the left of the photo. The original post about this great day can be found by clicking here

As the local community and indeed people right across Ireland and overseas eagerly anticipated these birds' travels, Sally made the earliest moves away from the nest sight. She was first to leave the uplands, her siblings and parents.  She was the first to see the coast of the Atlantic Ocean, the McGillicuddy Reeks and the Golden Vale. She made various movements around Munster but eventually succumbed to starvation in West Limerick in August 2013. See the original post here but better still, see the various other posts about Sally's short life throughout this blog site. 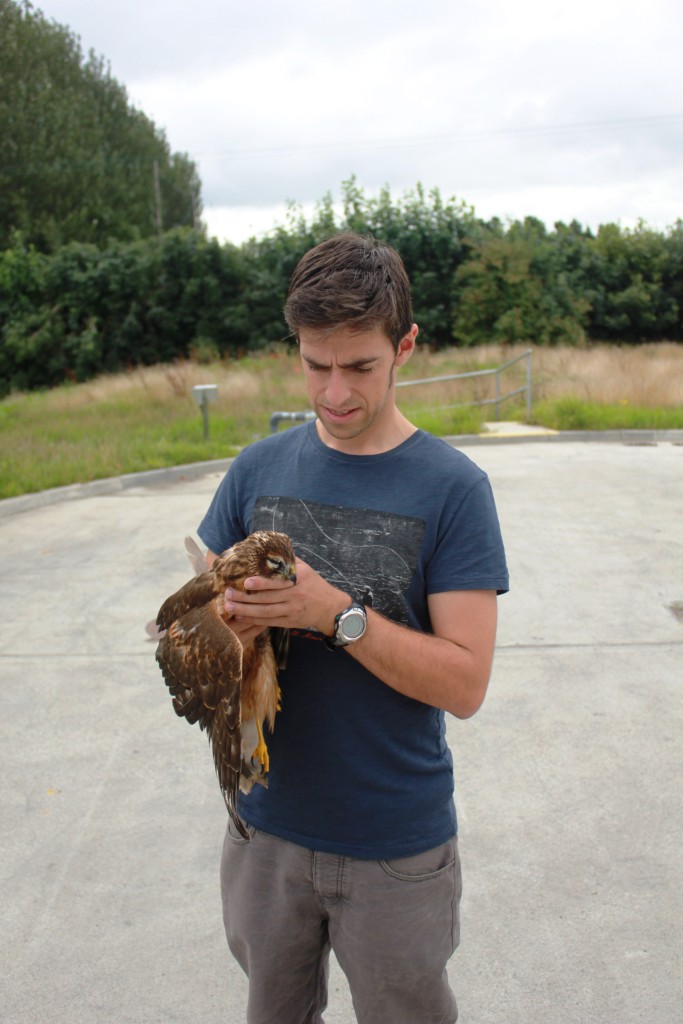 Heather was quieter in terms of her original movements. She stayed around the heather clad hills for a while, before making a very exciting move to Kildare and then the Dublin and Wicklow Mountains! Heather even made a visit over Croke Park on the weekend her native Kerry lost to the Dublin Blues in one of the greatest Gaelic Football matches ever played. She saw 80,000 people, but did 80,000 people see her? A lot more people got to hear about Heather on the Mooney Show on RTÉ Radio One (listen here from 01:04:00 and this certainly helped the profile of Hen Harriers among the general public and there was great support and hope for Heather in her future travels in life). Heather was already contributing to the conservation of her species in Ireland by endearing the public to this beautiful but vanishing native bird.

From Dublin, she visited the Royal County of Meath, where she was seen by the same researcher who fitted her with her satellite tag. To see her rise from her roost before sunrise over a field of oilseed rape was truly awesome and will never be forgetten. Miles from home, a world away in terms of habitat, a truly independent and free bird making her way in life. The shores of Lough Neagh next. Ireland's largest lake and Heather's furthest north trip. From there, she turned back around and made a direct journey all the way to the Atlantic cliffs of South County Cork. It is believed she must have met an older (wing tagged) female all the way up north and that this bird guided Heather to the Rebel County. The two showed up at their cliff top roost together on the same day. How else did Heather know how to find this roost for the very first time when she was hundreds of kilometres north in Lough Neagh the day before? She stayed there for some time with a number of other harriers, cruising around the tillage fields by day and roosting by night to the sound of Chough, Gulls and crashing waves. From these older birds, Heather would have learned of good hunting places and safe places to spend each night. Again, the same researcher was again lucky enough to see Heather here, while local man Dave McGrath got some wonderful photographs of Heather including this one below. 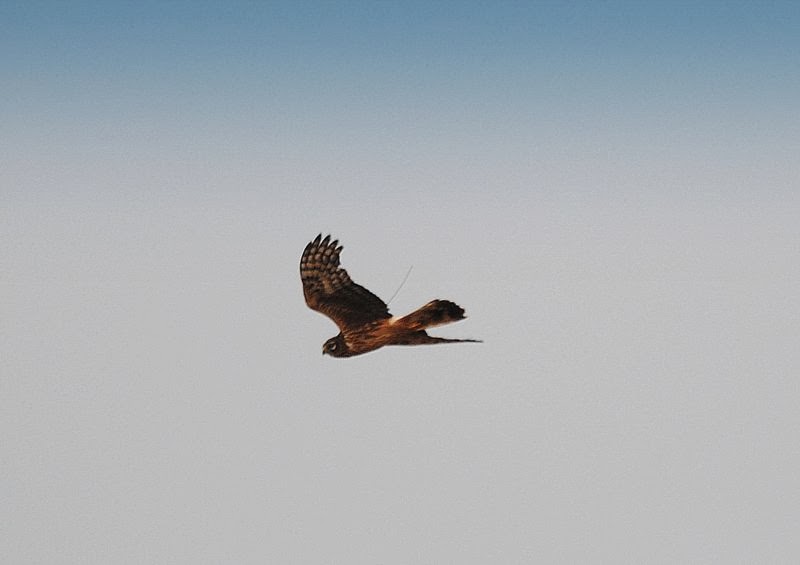 A new year came. 2014 saw Heather visit the Nagle Mountains and then West Waterford. Come breeding time, she was in the Ballyhouras and hung around with an established pair - did she want to breed? Was she just curious? Learning the ropes? Whatever the case, she did not breed that summer, but instead travelled through various counties to make it to Mayo. Mayo may have been perhaps one of the happiest and most content times in Heather's life. Heather's roost sites in and around Ballycroy National Park and Castlebar provided some super habitat in terms of heather, rough grassland, hedgerows and scrub. It was a beautiful summer and Heather's surrounds provided ample resources. To be honest, it would have been good if she stayed there the rest of her days, but a free and wild spirit, she was to go wherever she liked.

With the summer finished and the days shortening, Heather decided to retrace her steps and visit the exact same sites in Cork as she had spent the previous winter. However, after some time, she made the bold move back to her native Kingdom - this time South Kerry. She overlooked the spectacular Skelligs and even roosted on an offshore island for some time. She made a memorable trip home to Mount Eagle for a while. Even after all her journeys, she knew where home was at all times and could have returned to breed there this summer if she wanted.

Yet this was not to be. Throughout 2013 and then 2014 and then 2015, Heather's location was checked on a daily basis. Everytime, it was heart in mouth stuff as to whether she was alive or not, and exciting to think where she might be at that very moment in time. Every time without fail, she lit up our eyes when her tag showed she was alive and well. Until someone in South Kerry (in the very same area where the magnificent White-tailed Sea Eagles have been poisoned), decided it was a good idea to shoot Heather out of the sky in the second week of 2015.

A sustained series of negative media articles over the past year has vilified this, one of Ireland's most magestic yet most endangered birds of prey. Reports of "farmers unable to farm their lands" were published without reference to fact. There are two items where consent must be sought in Hen Harrier Special Protection Areas - 1. removal of field boundaries and 2. reclamation of heath/bog - both activities require consent for any farmer anywhere in the country even without anything to do with Hen Harriers or SPAs! "Tight restrictions?". The Hen Harrier has co-existed with small farmers for generations and it is afforestation that is seen as the largest threat. Under GLAS, farmers in Hen Harrier SPAs will be prioritised for funding - and hopefully that's something that gives people a viable alternative to planting their land (which the vast majority of farmers don't want to do).

The Hen Harrier is effectively bringing farmers in the Hen Harrier SPAs up to €140 million over the next five years, to stay and farm their land in the manner that has led to these areas being so important in the first place. The loss of this type of farming, which is difficult given the land types, has been one of the main reasons for the decline in Hen Harriers. When the people move out and the trees move in, the wildlife that depends on the previously existing habitats are also lost.

40 years or so of planting non-native Sitka spruce trees in these areas has only served to hasten the loss of small farmers and communities. The Hen Harrier SPA is bringing millions of euros to the pockets of those who farm in the most important breeding areas and is thereby contributing towards keeping people in an otherwise socio-economically struggling area.

Whats even more worrying, is that other Hen Harriers have disappeared from the same place as Heather at the same time, while at another roost in North Kerry (as reported previously), where there were 13 Hen Harriers just before Christmas, there are now none.

Heather was a fine healthy bird, a good weight and had just fed before being shot. She was knocked abruptly from the sky to the ground, with a ruptured liver, her right wing broken in two and her rib cage smashed. Her tag had a hole in the side of it, yet it still gave out accurate information as to Heather's location and the fact that she was dead.

Hopes and dreams stemming from 2007 to the future of Hen Harriers in Ireland. This was not just one bird, but the hopes for a species that has been and continues to vanish from our country. The story of these three birds - Heather's mother, her sister Sally, and Heather herself, sums up the issues for Hen Harriers in Ireland. Predation, Starvation (via lack of habitat), Persecution - three of the key aspects that are seeing Hen Harriers disappear from Ireland. Where Mount Eagle had 11 pairs in the 1990s, there is now 1 pair barely hanging on, mainly as a result of the heather moorland having and farmland been planted with commercial plantations. Curlew, Grouse and Skylark to name just a few have also disappeared. So too have local farmers, families and communities that once managed that land as a valuable habitat. We need to ensure small farmers are protected and supported to stay on the land and look after the wildlife and their own social heritage and indeed future. It is vital however, that any money provided to farmers in the name of the Hen Harrier really delivers for the Hen Harrier itself.

Heather's mom, the young female photographed in 2007 may not be around Mount Eagle for much longer - time is no longer on her side. Heather will not grace this area, nor will her sister, nor will 200 or so other Hen Harriers born and wing tagged or satellite tagged in Ireland since 2006.

We are losing a species right before our eyes.
It is possible to address this, and the solutions have been clear for some decades now. Less of the bad stuff (commercial wall to wall sitka spruce monoculture) and more of the goood stuff (farmers financially supported to stay on the land and paid to maintain the habitats as they have done for generations, rather than encouraged off the land by lucrative yet short term afforestation grants). €1.25 billion will be spent under GLAS for farmers to suppor biodiversity - lets hope it works for Hen Harriers, Red Grouse, Curlew, Snipe, Skylark, Meadow Pipit, Owls, Kestrel, Merlin, Marsh Fritillary, Ragged Robin etc. etc. and indeed the people who manage their habitats in these areas. Thankfully, the majority of people, espeicially the farmers in Hen Harrier areas, are realising these solutions.

It is vital that "environmentalists" and farmers continue to work together to resolve a future for all - the bird is dependent upon the farmer and the farmer may well be dependent on the bird to bring agri-environment payments so that the farm can remain financially viable.

Heather is gone from us but lets not say her life was in vain - lets not have this illegal and cowardly act define her legacy. Lets work together for a better future.