Heater leaves Mayo and returns to Cork! The seasons are changing and birds are moving to normal time roosts - IHHWS 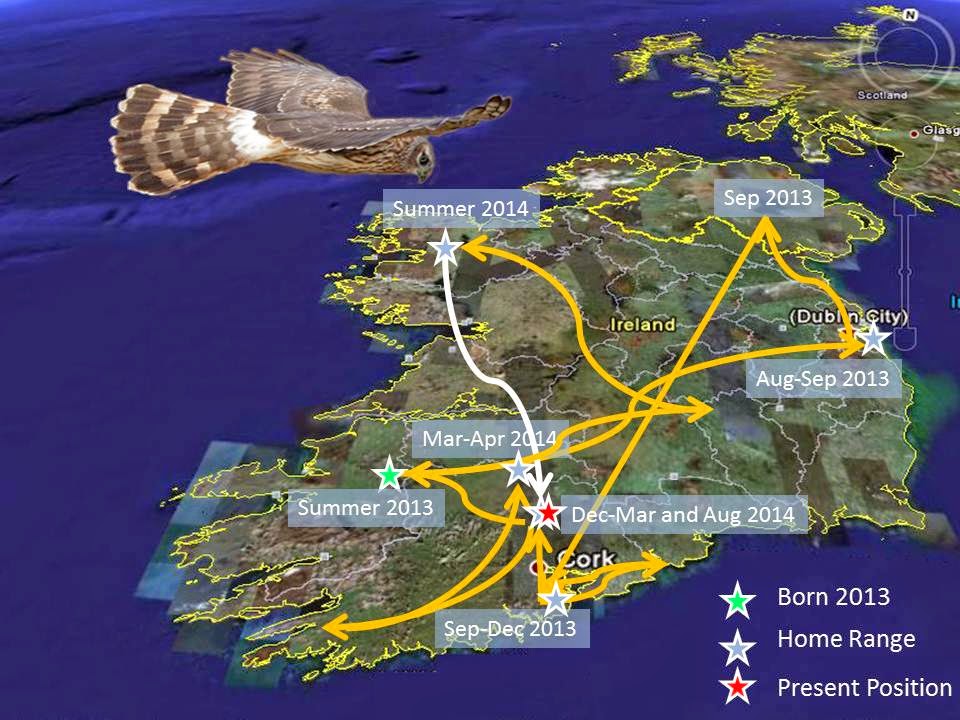 ﻿ Heather has once again made a massive move - this time in a reversal of what she did at the start of summer when she moved from Cork to Mayo. Ironically the last post on HenHarrierIreland (see below) posed the question would Heather (a Kerry born bird) move from Mayo at the time of Kerry and Mayo's All-Ireland Football semi-final clash - she has done just that!

She knows Ireland very well at this stage, having visited so many counties from South to North and East to West. Her movements have been a revalation and have given us a remarkable insight to the life of a young Hen Harrier. She has returned to familiar grounds, where she spent the latter half of last winter, from December to March before embarking on her epic journey to Mayo.

At this time of year, Hen Harriers are moving to their "winter" grounds, more appropriately known as normal time grounds, given they spend the majority of the year there (typically Aug-Mar). The Irish Hen Harrier Winter Survey has discovered so much about the ecology of Hen Harriers during this time and is now entering its 10th season - if you would like to take part email harriers@@ahg.gov.ie

The question on everyone's lips now is - will Heather stay where she is at present or will she continue further south to the coast where she spent the early half of last winter, making use of the stubble fields and hedgerows of South Cork. Will she even go somewhere else entirely?

Let us know what you think!
Posted by Unknown at 02:12