Sky and Blackwater flew the flag for their species. We wanted to see what is happening to our population, where do they go, what do they do? We wanted to see why so few wing tagged birds were returning to the population.Through this satellite tracking, we have gained a clearer picture as to why our population is decreasing, why Hen Harriers have been lost from so much Ireland. Even when against the odds, they manage to rear young to fledging, those fledglings are finding it very difficult to survive and may be dead within weeks of leaving the nest.

Blackwater, our beautiful female, had made a bid to become independent of her parents and travelled along her native Blackwater Valley until she reached farmland near the village of Cullen, just north of Millstreet, Co. Cork. Her satellite tag has not transmitted for over two weeks now, indicating that she has most likely perished. To have watched this chick grow from the time she was just a ball of fluff in the nest with her brother and sister, to see the painstaking efforts to which her parents went to rear her, to see the potential she held to become a fully independent, stunning female harrier, and ambassador for her species; all to end in tragedy is heart breaking. 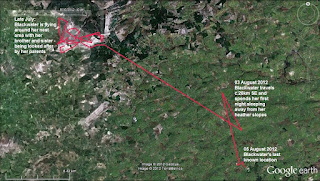 Sky was found dead just 350 metres from his nest. There was a fox scat in his nest (a small patch of scrub surrounded by forestry) which may indicate predation as the cause of death (his body also lay close to a fox track), although lack of food is also a possibility given the light weight of his body when found.

Four young harriers were satellite tagged in England and Scotland this year by Stephen Murphy (who tagged Blackwater and Sky here in Ireland) using the very same tags and very same methods and all are performing brilliantly now as independent harriers. Hen Harriers in Ireland clearly have a more difficult start in life than elsewhere.


The worrying thing is, Sky’s parents and Blackwater’s parents cannot live forever and when young harriers are not surviving to take their place on the landscape, we lose our population and this has been happening for some time now.


Population Viability Analysis shows that the Irish Hen Harrier population is not reproducing enough to sustain itself.

1. The adult Hen Harriers are finding it difficult to find food.

Due to changes in the landscape that Hen Harriers have relied on for centuries (i.e. moorland, scrub and farmland -much of which has been destroyed, removed or forested), food is no longer as plentiful or as easy to catch. The Hen Harrier is not just a species in itself...because it depends on the smaller animals and birds for food, it is a mirror to the natural world which we can hold up and see how things are out there...if small animals and birds are doing well, Hen Harriers are doing well; if small animals and birds are doing poorly, Hen Harriers will suffer greatly…evidently things are rather poor in the uplands. People should be dissuaded from the excuse of poor weather in 2012 as a reason for decreased food resources, because territories experiencing the same weather patterns had greatly differing food resources, primarily related to habitat.

2. The parent Hen Harriers are spending longer away from the nests in search of food.

This means increased energy expenditure and weaker parents, lower food delivery rates to the nest, less eggs, less chicks, weaker chicks, less brooding of the chicks (for shelter, warmth and dryness) and increased chance of predation (while the parents are away trying to find food). This summer, we witnessed parent birds travelling massive distances over forestry before they even reached their hunting grounds and there were days when chicks may have received just one food item in a day, whereas they should have been receiving around 20 food items in a day. Many nests in Ireland did not rear any chicks at all this year due to lack of food and predation.

3.  The chicks, if and when they fledge, are finding it next to impossible to make it on their own.

If experienced adult birds are finding it difficult to catch food. How difficult must it be for an individual bird who has up until 3 weeks of having left its nest been provided for by its parents, and suddenly left to fend for itself and catch its own food? The deaths of Sky and Blackwater show just how perilous it is for young Hen Harriers in Ireland. One should be dissuaded from thinking “this is nature” because the landscape the Hen Harrier and many other upland bird species depends on has been highly fragmented and augmented to the stage where it is no longer natural and the odds are stacked against the survival of many of our native species. The untimely deaths of Sky and Blackwater should not be taken as isolated events. After years of wing tagging, it is estimated that four out of every five Hen Harriers in Ireland dies before it reaches its first birthday.


So, will we just leave it at that or continue to push for Hen Harrier conservation in Ireland? What does Hen Harrier conservation mean? It means whether we want to continue to experience the sight of sky dances or food passes, or softly gliding ringtails or silver males in our landscape. Again, the Hen Harrier is a mirror to the health of the upland landscape also. Many places have already lost their local Hen Harrier population and the small pockets that are left are now all the more important. An rud is annamh is iontach – that which is rare is wonderful.


The future of the Hen Harrier ultimately lies with all stakeholders, landowners and conservation groups interested preserving our natural heritage.

One way in which you as an individual can help is to take part in national research on the Hen Harrier, by submitting sightings or conducting roost watches. Anyone that is willing to contribute and to experience Hen Harriers is encouraged to contact home.of.harriers@gmail.com

Thanks to everyone who contributed to and wished this project well.